From nukes to murder to drug smuggling, the Everglades have had an interesting history to say the least. Since moving to south Florida, apart from the deep love I’ve developed for the recreational fish species I am lucky enough to research, I’ve developed a fascination with the history of the Everglades. Unfortunately, very few places still exist in the US that are able to give you the feeling that you’ve time traveled to a prehistoric, untouched past, where reptilian dinosaurs larger than boats and monstrous schools of fish larger than humans lurk beneath the water’s surface. Anyone who knows anything about the terrible ideas us Homo SAPIENS have had in the past regarding the Everglades knows that the ecosystem has been drastically altered and much of the beauty we see today is a mere shadow of what it once was. From experience and communication, the trials and tribulations that always seem to coincide with field research often causes graduate students conducting field research to form love/hate relationships with their study sites. I’ve developed a deep love for the Everglades, but more specifically, a deep love with one field site in particular. Aside from the beauty it holds, much of this love comes from learning its troubling history with man.

The Alligator Creek subestuary stretches from north-central Florida bay past Garfield Bight, to about 7 miles north of Flamingo. The subestuary consists of four large mangrove lined lakes that are connected to each other by long, meandering and overgrown creeks dense with spider webs, snags, and the whispers of the historic Everglades. This subestuary used to be a hot spot for waterfowl hunting. So much so that old timers have been quoted as saying that the usually remote and quiet lakes would “sound as if a war had broken out” with the amount of gunshots produced from waterfowl hunters gunning down the hundreds of thousands of waterfowl that would migrate to the system every year in winter months. This of course is no longer the case as hunting in Everglades National Park is illegal and the majority of the Alligator Creek subestuary is now protected by fairly strict regulations. Most of the subestuary is now a pole/paddle zone meaning that it’s illegal to propel a watercraft in the lakes with the use of an engine. While this makes getting into much of the subestuary very exhaustive and time consuming, one lake’s protective regulations go beyond this and is off limits to anyone without a permit to enter. This is Cuthbert Lake.


Cuthbert Lake lies in the northeast corner of the Alligator Creek subestuary and nowadays, often has enormous crocodiles sunning on the mud flats and sub-adult tarpon rolling in the channel out front of the overgrown and hard to find creek entrance. Cuthbert Lake looks very similar to the other lakes in the Alligator Creek subestuary, but Cuthbert Lake is different in that it has a fairly dark and bloody history. In the late 1880’s and early 1900’s, many may know that it was fashionable in New York and London for women to don bird plumes on their hats. The more “airy” and “floaty” the feathers, the more desirable they were and many of the wading birds in the Everglades, such as Snowy Egrets, develop such feathery plumes during nesting season. At the time, plume feathers were worth about double that of gold by weight and 1oz of plume feathers would sell for about $30. George Cuthbert, apart from being a ship captain and fisherman, was a plume hunter.

Seminole Indian rumors of enormous rookeries existing in the Everglades, composed of thousands of wading birds, drove Cuthbert to sail 80 miles south from his Marco Island home to the narrow creek opening of the Alligator Creek subestuary. Cuthbert waded across mud flats littered with crocodiles and bushwhacked up current through dense mangrove creeks for days while living out of his canoe. The further north Cuthbert trudged, the more wading birds he would see flying to and from a remote region in the distance. Cuthbert followed the flight paths of the birds and was led to the hidden creek mouth of the mysterious lake that would later be named after him and ultimately cause the murder of the first game warden in the Everglades (but that is another story). Emerging from the northernmost creek of his journey, Cuthbert found an expansive lake with a 2-acre mangrove island in its northeast corner. From a distance, the island looked as though it was plagued with white flecks. As he paddled closer, thousands of great and snowy egrets, ibis, wood storks, tricolored herons, and roseate spoonbills came into focus. He later told his children that he had found his “flower, a beautiful white blossom.” The nesting birds were sitting “ducks”. Cuthbert quietly tied his canoe to a branch on the island, grabbed his rifle, and prepared, hidden amongst the mangroves. Plume hunters of Cuthbert’s day were not what one today would refer to as a conservation minded “sportsmen”, not by any stretch of the imagination; they were ruthless harvesters. Cuthbert shot the adult birds, scalped the plume feathers from their heads, tossed the bodies aside, and left the orphaned chicks to starve. Cuthbert had found his legendary honey hole and like many others to come, littered it with carcasses.

Cuthbert’s first two trips yielded him about $2,000 worth of plume feathers which equates to about $50,000 today. A few trips later and Cuthbert had made enough money to buy half of Marco Island and comfortably retire. Cuthbert and his family have since sold most of the land they acquired on the Island, but it’s estimated that their property would now be worth around $5 Billion. Of course, Cuthbert’s good fortune made a stir in the plume hunting community and others later found the legendary rookery and decimated the wading bird populations. One local plume hunter was quoted as saying that “you could have walked around the rookery on the bodies of the dead birds”.

Fortunately, the Migratory Bird Treaty Act was passed in 1918 and the plume trade died shortly after.  While I’ve never really been much for history, learning about the gruesome and exploitative history of one of my research sites has been very interesting and I think that the knowledge of its past has led me to appreciate the Alligator Creek subestuary’s beauty that much more. I encourage any graduate students who have read this to try to do the same and look into the history of their own field sites. You never know what you may find. 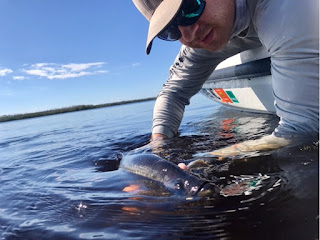 Cody Eggenberger is a Master’s Student in the Earth and Environment department at Florida International University under the guidance of Dr. Jennifer Rehage. Cody’s thesis research investigates the potential impacts Everglades restoration may have on Common Snook (Centropomus undecimlis), sub-adult Atlantic Tarpon (Megalops atlanticus), and their predator’s (Bull and Lemon Shark, Carcharhinus leucas and Negaprion brevirostris respectively) habitat use using acoustic telemetry methodology. His work aims to add to the creation of a predictive framework for the effects hydrologic variation, restoration, and climate change have on recreational fisheries in the coastal Everglades.

What is Peat and Why is it Collapsing? 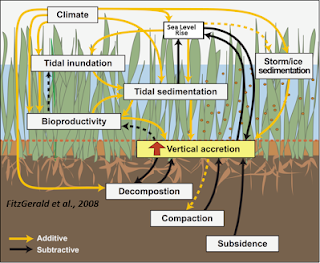 Written by Benjamin J. Wilson For a background refresher on the impacts of sea level rise in South Florida, see my previous blog post. Figure 1. Feedbacks that lead to the creation of wetland peat soil. Peat soil is the backbone of many wetlands. It is full of organic-rich carbon that is formed when plants perform photosynthesis: they suck up carbon dioxide (CO 2 ) from the atmosphere and use it to make roots. These roots go into the soil, and because decomposition is slow in wetlands, these carbon-rich roots are stored in the soil for very long periods of time, allowing the marsh to grow in elevation (Fig. 1). Under freshwater conditions, this carbon can be stored in the soils for thousands of years. This leads to a landscape full of pristine marshes that provide habitat for wildlife and are very efficient at filtering contaminants out of water (Fig. 2a). However, in some brackish marshes, especially in the Everglades, an exciting feature appears. From above, you can
Read more