A recent trip to the Everglades with Palm botanist Sara Edelman was meant to provide a welcome break from studying for qualifying exams, and give her the opportunity to further educate me on all things palm (which was previously limited to determining which lizards in Miami appear to live on them).

After spending the morning locating individuals of her study species, the native and state-threatened Paurotis palm (Acoelorrhaphe wrightii), we had received very little wildlife luck (which was the true reason for me volunteering to 'help'). From past visits, I had found brown anoles (Anolis sagrei) at every car park along the Everglades National Park road down to Flamingo, likely hitch-hiking unwittingly on visitors cars, but to my knowledge they had yet to disperse convincingly out from these. On our second to last survey of the day, to this tree island off the main road just south of Mahogany Hammock, while searching for native green anoles (Anolis carolinensis) which I had yet to see, I heard some rustling in the bushes - lo and behold, sitting there as bold as day signalling straight at me was a male brown anole! 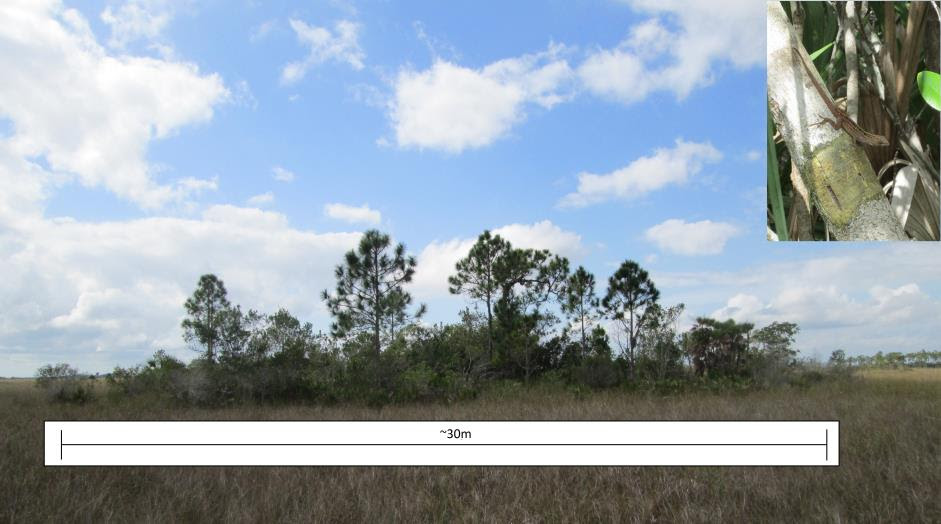 Everglades tree island characterised by Paurotis palm (Acoelorrhaphe wrightii), Saw palmetto (Serenoa repens), Buttonwood (Conocarpus sp.) and Pine (Pinus sp.), with [inset] brown anole (Anolis sagrei) observed inside
Now, observing brown anoles here shouldn't be a surprise, should it? After all they are already in many surrounding places accessible by car, therefore it was only a matter of time before they spread further afield. However, areas like these in the Everglades may represent one of the last refuges of green anoles from introduced non-native species found everywhere else in south Florida (an idea I mentioned here a few months ago). Tree islands are masses of larger vegetation (unsurprisingly characterised by trees) formed gradually as vegetation clumps in the slow moving Everglades flow. Over time, debris from colonising plants raises the ground level just above surrounding water level, meaning they provide important havens for many wildlife species. During the wet season the dispersal potential for brown anoles would be limited. All of the areas surrounding tree islands are generally inundated, meaning landscape movement through the thin-stemmed sawgrass plains may be easier for more nimble footed green anoles, however somewhat less graceful for browns. This, however, is all hypothetical.
So ruling out human-mediated release or dropping by a clumsy predator, we could assume that this chap arrived there all by himself. This would suggest that brown anoles have no problems in traversing through sawgrass, although temporal factors may be important (i.e. dispersing during the dry season when water levels are low or absent).
The implications for the expansion of this species through the Everglades remain unclear, although their relationship with green anoles leads to a predictable outcome (discussed extensively on AA [1, 2, 3). Just how much effect is a highly fecund, hyper-dense, extremely competitive and resilient insectivore going to have on these small 'island' ecosystems? 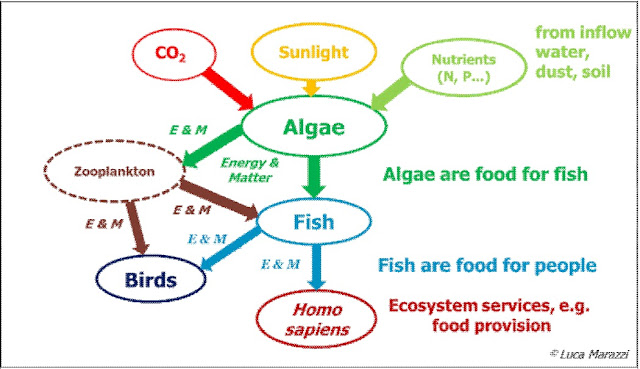 by Luca Marazzi*
Why is it important to study algae? To start with, algae produce ~ 50% of the oxygen on planet Earth, they are food for small and large animals that in turn are eaten by people, but they also recycle nutrients and absorb CO2 from the air; by existing and doing their own thing, these microorganisms provide these so called ecosystem services to human beings (Fig. 1). Moreover, as algae reproduce fast and are often adapted to specific environmental conditions, understanding how many species of algae, and which ones, live where and why give us cues as to the health of aquatic ecosystems, such as rivers, lakes, and wetlands.
Fig. 1. Simplified scheme of the role of algae in food webs (from my Ph.D. Thesis).