I think my dad sang "Algy" to me when I was a little tyke, though in my 3-year-old wisdom I must have taken "Algy" as "Algae" and from then on aspired to become a phycologist. Now, some attribute this verse to Ogden Nash, while others chalk it up to Anonymous (that great and varied writer!). And while this verse may be humorous, it's not truly nonsense (though this sentence is). I've seen analysis of Algy and the bear as an allegory for existentialist being (what does it mean "to be"?), while others just say (spoiler alert) that the bear ate Algy. BUT, I think they're all wrong as a result of a translational error where "Algy" should be "Algae" as my 3-year-old self clearly realized. THEREFORE:

These lines are clearly discussing the cyanobacteria that grow in polar bear hair fibers! That's right - there's a type of cyanobacteria (blue-green algae) that lives in the hollow hairs of polar bears. This isn't a natural phenomenon, as the cold habitat of polar bears prevents algae from normally colonizing polar bear fur, but in warmer zoos algae find the hair follicles of the bears a cozy place to set up shop (and turn the polar bears what some think is a sickly "green around the edges").

"The bear was bulgy.
The bulge was algae."

These lines are, likewise, clearly categorizing the specific type of the cyanobacteria in those hairs. Lewin et al. in 1981 found that the algae living in polar bear hair were cyanobacteria of the order Chroococcales, resembling the species Aphanocapsa montana. Individuals of this species are unicellular and spherical, described as globules and gelatinous. I think Anonymous added "bulgy" to that description!

Glad we cleared that up.

But from here we can go completely crazy. You know that greenish tinge of sloths? Algae. (This one's really quite cool, too. Sloth hairs have cracks that allow rain to saturate the follicle, which in turn allows algae to grow hydroponically - in this case a green alga named Trichophilus welckeri is most common. 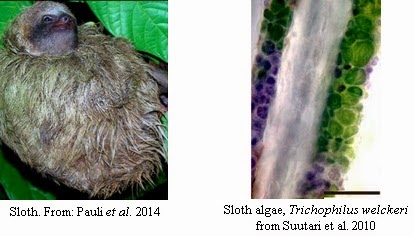 There's a really quite hilarious and informative recent study by Pauli et al. 2014 and article that summarizes a very "crappy" pathway among sloths, moths, and algae - check it out and impress your friends! Make that one sloth-obsessive think twice about that love for adorable sloths. And even a new genus and species of red has been described from sloth hair!)

I think I also promised a picture of a sea otter. You know what? Algae in their hair, too.

And if we look beyond hair, we see all sorts of epizoic algae (algae growing on animals): on shells, turtles, lizards, manatees! Moral of the story? Wash your hair. Algae are here to take over the world.

Oh? You don't see the relevance of this to graduate research in the Everglades? Well, I could attribute this to the strain of my M.S. research finally getting to me, propelling me into babbling analysis of children rhymes and my research project (I wonder if I could squeeze this into a chapter of interdisciplinary applications of the research...). But, really, I was thinking up ways of introducing those that need no introduction: ALGAE! Pop quiz for name recognition:

If any of those sound familiar, you've likely come across algae in some way or another, either as a product using some algae extract (e.g., carrageenan, a thickening agent, is used in many ice creams and is extracted from the red alga Chondrus crispus) or some other basic function (e.g., algae produce over half of the oxygen in the atmosphere!). Sylvia Lee's already written about "What is algae?" so I won't elaborate beyond "the bulge" (as above). But, instead, what's the big deal about algae in the Everglades? Well, you're going to have to stay tuned for next week's (?) episode of Nick's Wonderful World of Algae. I see you all waiting as eagerly for it as for new episodes of The Walking Dead or Game of Thrones, etc. But what about The Walking Algae or Game of Cyanos?

A teaser: I mentioned algae on manatees. Dr. Tom Frankovich from FIU has actually looked into diatoms that live on manatees 'round these parts - super cool stuff. You may have noticed manatees that look a bit mossy. Let's amend that to "algae-y" and start singing, "Algae met a manatee. The manatee met algae." And they lived happily ever after.