Showing posts from July, 2012
Show all

Ever wonder what an alligator's breath smells like? One of the perks of my research is I get to hang out within sneezing distance of the amazing reptiles and I can tell you from first hand experience that their breath smells like death. Two of the major questions I try to answer with my research is what do alligators eat in the coastal Everglades and where do they eat it? To get at these questions, I use two different techniques: stomach contents analysis (SCA) and stable isotope analysis (SIA).
2 comments
Read more 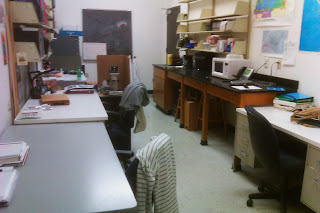 When one thinks of a student doing research in the Everglades, one would assume that the researcher is an outdoorsy type who could never thrive in an office or indoor work environment. Part 3 of this series, however, is about grad student offices, which is where some of us actually spend the majority of our time. If you haven't been keeping up with this series, you can learn more about the other aspects of grad student life in Part 1 and Part 2 of "Grad Student Life Beyond Fieldwork."
1 comment
Read more

A Symphony of Skeeters 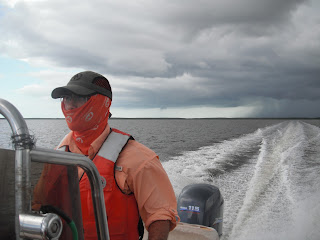 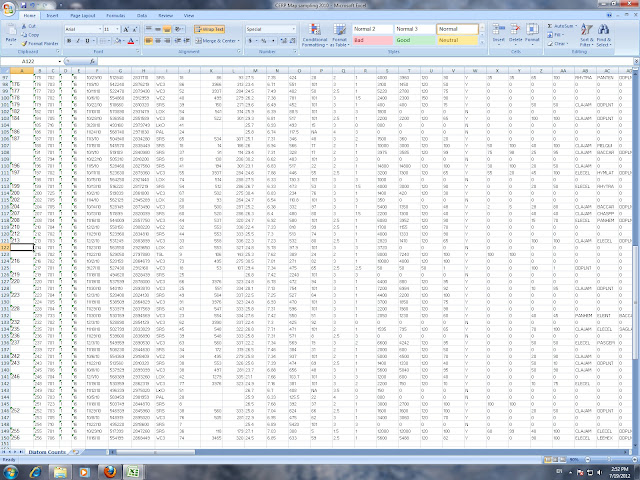 What data organization looks like (aka what I've been staring at all day today):
2 comments
Read more 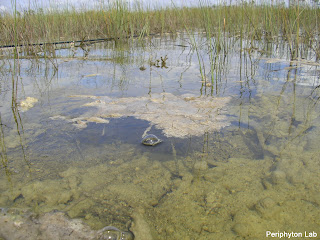 It is more than likely that you have already encountered periphyton of some form. You may have encountered it without even really noticing it or knowing what it was. Or you may have thought it was pretty gross. Periphyton is a bunch of algae, fungi, other microbes, and dead material either growing or aggregating together on or around a surface. “Peri” means around (like in perimeter) and “phyto” means plant. The plant part refers to the algae that are a major component of periphyton. Periphyton can grow on plants (epiphytic), on rocks (epilithic), on top of the sediment surface underwater (benthic), and even on animals (epizooic). Periphyton has been called “pond scum,” “muck,” or even “rock snot.”
Post a Comment
Read more 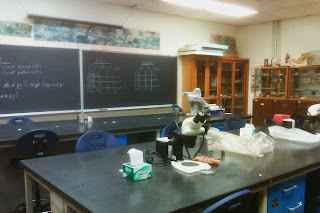 What do FCE grad students do besides trekking through mangroves, collecting water samples and battling mosquitoes? My four part series, “Grad Student Life Beyond Fieldwork,” is designed to give readers of this blog a general idea of what we do when we’re not in the Everglades. Whether you’re a prospective student wanting to know more about grad school life or a PI wondering why we haven’t finished analyzing our data yet, we hope this series gives you a more complete picture of what we do. Part 1 covered graduate coursework and degree requirements. Today’s post, Part 2, covers our experiences as teaching assistants.
Post a Comment
Read more 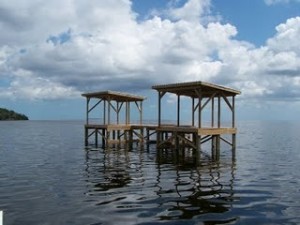 To study American alligators that live in the coastal Everglades you need to be a bit of a night owl. Alligators are much easier to find and catch at night because their eyes glow bright red when you shine a spotlight at them, whereas during the day they blend in amazingly well with the water and the vegetation because of the sleek, low profile of their bodies.  Fortunately for me, my natural sleep patterns involve staying up late and waking up around noon.
Post a Comment
Read more 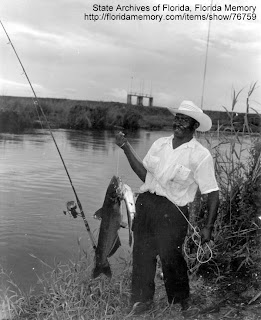 For those of you who read Using "Sound" to See Underwater  and Everglades at Night ,  you've learned a bit about the DIDSON (an imaging sonar) and have gathered that some of my work occurs at night in the glades.  Below, I'll explain how I'm using the DIDSON to understand the role of predatory fish in canals of the Everglades.
Post a Comment
Read more
More posts