By Unknown - July 06, 2012
To study American alligators that live in the coastal Everglades you need to be a bit of a night owl. Alligators are much easier to find and catch at night because their eyes glow bright red when you shine a spotlight at them, whereas during the day they blend in amazingly well with the water and the vegetation because of the sleek, low profile of their bodies. Fortunately for me, my natural sleep patterns involve staying up late and waking up around noon.

Even with the natural advantages of my sleep patterns, this type of research is easier to carry out if you camp out in the Everglades because you can quickly crash in your tent after a long night of alligator wrestling rather than making the long haul back to shore. Everglades National Park provides a surprisingly large number of great camp sites for researchers and fishermen to use. One type is called a "chickee," which is a very simple wooden platform that sits on stilts above the surface of the water.
The chickees are generally clean and comfy (as long as you bring an air mattress), and sleep is aided by the sounds of the water gently lapping at your platform and the night calls of the frogs and birds.

There are also campsites that have been cleared out of the middle of mangrove islands. Our lab's Everglades research team frequently stays at one called Cane Patch because it can accommodate a large number of tents and has lots of space to move around in. 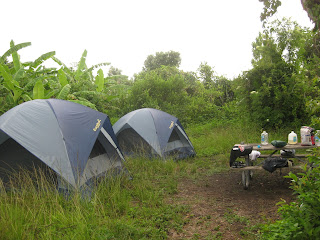 The disadvantages of staying at a campsite rather than a chickee surrounded by water is that you open your supplies up to invasion by rats and you can get a scare from the occasional rattlesnake, but on the plus side you have space to build a small fire so you can dry your clothes after the skies open up and drop buckets of rain on you. 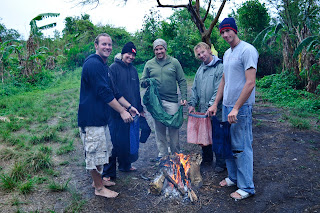 After doing alligator research in the coastal Everglades for 5 years, camping out at my study site is now one of my favorite things to do. The sunsets and sunrises are superb in the swamp, and the stars at night aren't washed out by the neon lights of Miami. When the moon is full and the sky is clear, it can feel as bright as daytime, and the alligators are just waiting for me to find them. 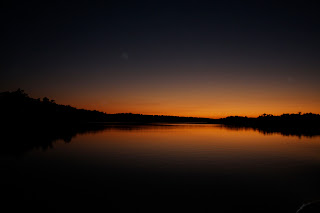