Why I love alligators

By Unknown - October 04, 2012
I've always had a passion for animals, particularly large animals of the dangerous variety (big predators), but before I started my PhD I had never really spent much time thinking about alligators. Now, after working with alligators in the coastal Everglades for the past 5 years, they are one of my favorite animals. Let me tell you a few reasons why: 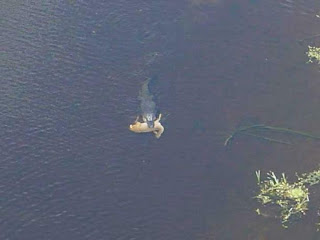 2. Alligators can change their digestion rates. Alligators eat large meals (like whole deer) fairly infrequently, so it's to their advantage to be able to slow down their metabolism when they have nothing in their stomach to save energy. However, when they do eat a large meal, it's to their advantage to digest it quickly so their movement isn't hindered by having lots of meat sitting in their stomach slowing them down. The way that alligators ramp up their digestion is really cool: they have a "shunt" in their heart that they can shut off, forcing carbon dioxide rich blood (which would normally go to the lungs to allow the carbon dioxide to be exhaled) to the stomach, where that carbon dioxide gets turned into gastric acid and helps break food down rapidly.

3. Alligators breathe like birds. It's not exactly clear how they do this, but a study showed that alligators breathe unidirectionally, similar to the way birds breathe. Mammals (like us) breathe bi-directionally or "tidally," with air coming in to our lungs, then stopping and being forced out in the opposite direction through the same pathway. Alligators and birds, in contrast, have respiratory systems that allow air to enter their lungs through one pathway but then leave through a different pathway, meaning air always moves in one direction through their respiratory systems. It's thought that this unidirectional system is more efficient at extracting oxygen from the air and shows that alligators and birds are quite closely related.

4. Alligator immune systems are ridiculous. During my field research I've encountered many alligators missing part of their tails or even whole arms or legs, yet most of these individuals seem perfectly healthy. How is it that an alligator that gets in a fight with another alligator, ends up with a gaping wound, and still has to  live in a swamp filled with bacteria, viruses, and parasites doesn't get incredibly sick? It turns out that the alligator immune system is 10 times more effective at killing off bacteria than the human immune system and that alligators can mount immune defenses against 3 times as many strains of bacteria as humans can. Some researchers are currently looking into ways of exploiting these powerful antibacterial properties of alligator immune systems for human benefit.

5. Alligators eat fruit sometimes! Most people think of alligators as strict carnivores, but I've found through stomach contents analysis that alligators in the coastal Everglades eat lots of pond apples (Annona glabra), a less than tasty fruit that most humans don't like. I also worked with some colleagues to research other kinds of fruits that crocodilians have been documented consuming and we found records of 46 different fruits in crocodilian stomachs. We don't know if they eat the fruits intentionally or just because they are curious animals and will put anything in their mouths, but it's an interesting phenomenon none the less.

6. Alligators can move far and fast. Alligators are typically thought of as slow-moving animals that laze around sunning themselves for most of their lives, but my movement studies paint a more nuanced picture. Back in 2007, in collaboration with Frank Mazzotti of the University of Florida, we attached GPS transmitters to two alligators in the Shark River Estuary. Over the next 146 days, one of the alligators moved a total of 801.5 km, an average of 5.5 km per day! Furthermore, the longest distance traveled in one 24 hour period was 22.4 km, and the fastest speed recorded was 2.9 km/hr. However, over 58 days the other alligator only moved 8.7 km total, an average of 0.15 km per day. I guess some alligators really like to explore and see the world, while other alligators like to stay home and watch TV.

All of these adaptations put together (plus many others) are the reasons why crocodilians have been so successful over many millions of years. They are incredibly adaptive animals that can live almost anywhere that freshwater exists in the tropics and sub-tropics, they can move long distances to find food and mates and improve their living conditions, they can save energy when food is scarce but take advantage of big meals when they do come around, they almost never get seriously ill, they have efficient respiratory systems, and they can grow very large so that other animals can't hurt them. They are truly amazing creatures and I feel very lucky to have the opportunity to study them.

For further reading, check out: