Extreme ecology: taking a look at the 2010 freeze

I am writing today to discuss extreme ecology!

As much as I wish that “extreme ecology” is studying ecology while surfing or snowboarding, it is not. Rather, extreme ecology or the” ecology of extremes” is the study of how ecosystems change following very rare natural disturbances.   These disturbances are more like natural disasters, that include volcanic eruptions, biblical floods, hurricanes, super storms, and boiling heat waves.  Extreme disturbance events are so harmful because they often kill everything that happened to be in the path of the disturbance. On top of destroying ecosystems, these events incur billions of dollars of damages to humans.  The 1980 eruption of Mount St. Helens provides a good example of an extreme disturbance event. 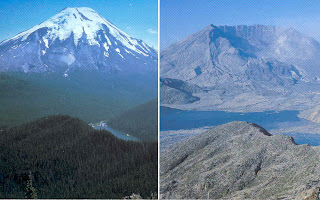 Mount St. Helens before and after the 1980 eruption

You can see in this picture that after the eruption of Mount St. Helens, swaths of forests  that are harvested for timber were destroyed. The loss of these forests caused substantial economic losses for local timber industries and completely changed the structure of the ecosystem.   Because of the severity of impacts that usually accompany extreme disturbances, their foot print or legacy often persists for a very long time, in some cases hundreds of years.

The study of extreme events, in particular extreme climatic events such as hurricanes, winter storms, droughts etc., and their impact on natural systems have now popped up on scientists’ radar. These events are receiving extra attention because recent data shows that extreme climatic events are increasing in frequency. These events are increasing in frequency likely because of increased atmospheric green house gases and increasing air temperatures.  For more information about why this is happening please visit this link.

This brings me to recent events in South Florida. In January of 2010, south Florida and the Everglades was impacted by an extreme cold front that among other things, devastated many estuarine fish populations, killed mangroves, and caused catastrophic losses to the citrus industry. In fact, the 2010 cold front is the one of the two most severe to pass through the region in roughly 90 years (The other occurring in 1940).  Economically, this event was devastating, reducing many important tropical fisheries by as much as 80%, and consequently leading to roughly 50% reductions in inshore fishing trips in the Gulf of Mexico. 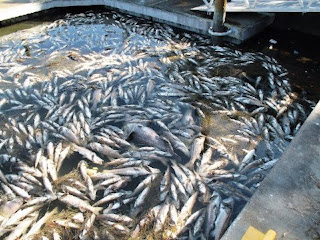 Since Florida’s recreational fishing industry generates over 8 billion dollars a year in angler expenditures, this freeze cost quite a bit of money for many Florida residents that rely on money spent by anglers for income.  The Citrus industry also lost approximately 10% of their crop from the freeze. Florida citrus provides over 40% of the worlds’ orange juice supply and takes home a little under 1 billion dollars per year.  Consequently, this freeze that lasted only 12 days, likely cost hundreds of millions of dollars through the losses of valuable natural resources. 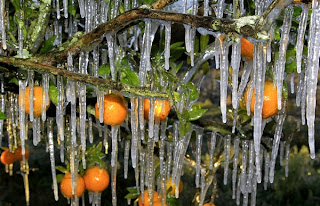 Orange tree freeze hardened in preparation for the 2010 cold front

Unfortunately, temperature records do not go far enough back in time to capture multiple cycles of long-term weather patterns that create extreme cold fronts. Because these records are rather short- lived (approximately 120 year records), there is not enough evidence to know if they are increasing in frequency. However, what is known for sure is they are not going away.  And, in an ever warming world, the impact of extreme cold fronts will only worsen. A new challenge for researchers, resource managers, and politicians will be to develop a deeper understanding of the magnitude of impacts of these events, that will help us better prepare for the potential losses of valuable natural resources.  Ultimately, if these cold fronts become more frequent, decision makers  must start thinking of alternative careers and sources of income for those whose livelihoods are dependent on South Florida’s valuable natural resources.