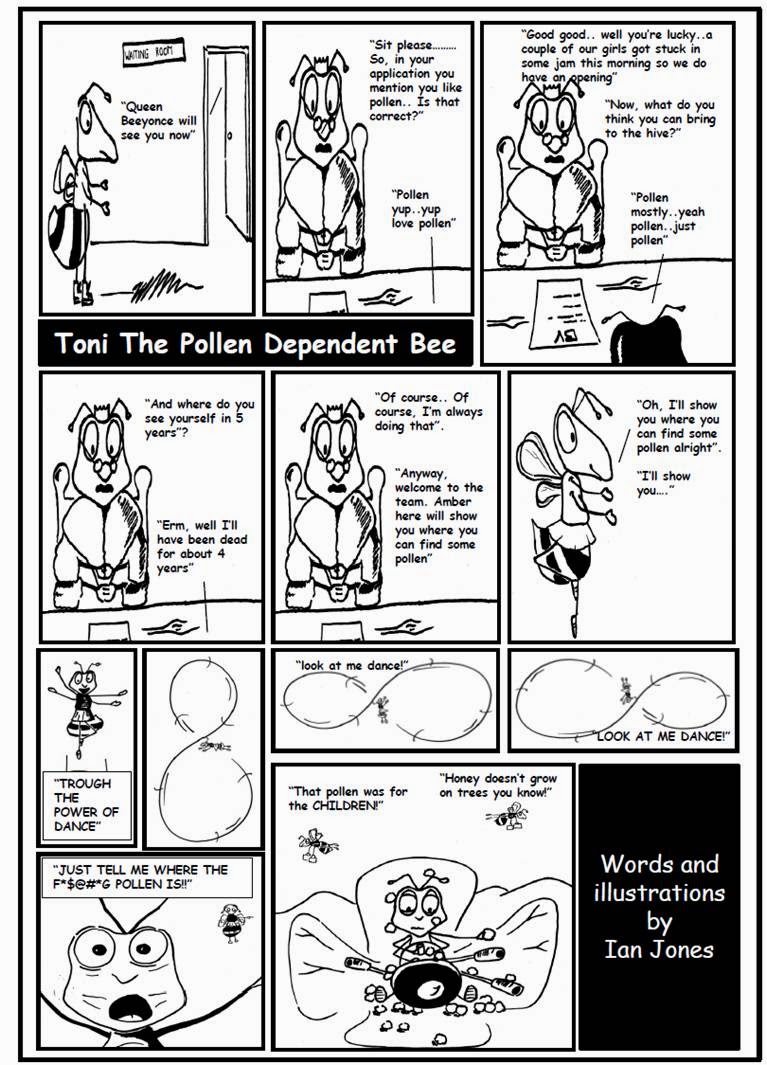 Toni the bee….. with a crippling pollen dependency
In the summer of 2013 I took over as the head TA for the QBIC program at FIU. The program runs alongside the general Biology program but maintains small class sizes, and delivers an integrated curriculum which encourages student to think critically about biological concepts. On the first day of our summer semester I surveyed the new freshman cohort to find out where their scientific interest lay. Unsurprisingly, nearly 100% of the students planned to pursue a medical career, and many already had specializations in mind. It’s very easy to question this level of career certainty in people so young, but it’s also impossible not to be impressed by their drive and ambition. I’m not one to bemoan the dominance of the medical sciences, but it is clear that efforts to generate interest in ecology among young people can be boosted. With that in mind, a personal goal within the QBIC program is to develop creative teaching tools that might make students more receptive to ecological topics.
Last summer, thanks to funding from the FCE student group, I was able to attend my first national conference, Botany 2013 in New Orleans. The event was an overwhelmingly positive experience, and I took the opportunity to interact with as many people as I could. One conversation in particular, with a pollination biologist from California, sparked an idea that stuck in my mind. We talked about his experience witnessing “drunk bees”, that would sit for long periods in his flowers, seemingly wasted, and covered in pollen. A bee version of Tony Montana (you might remember the scene from Scarface) emerged in my imagination, and I decided to start work on a series of cartoons, that combine botanical, entomological, and ecological concepts with elements of popular culture. The cartoons can be used as discussion pieces in the classroom, and are simplistic enough that students might continue the stories themselves, or relate them to other biological systems.
As it turns out, bees have long been known to become intoxicated on a number of chemicals that exist in their environment, from ethanol in fermented nectar, to man-made pesticides and fertilizers. Ethanol consumption is known to impair social communication in honeybees, Apis mellifera, which have even been used as an animal model for the study of alcoholism (Bozic et al. 2006). Beyond drunken bees, the cartoon below, ‘Toni the Pollen Dependent Bee’, touches on several elements of honeybee ecology, such as the caste system, and the waggle dance. Discussion questions might also emerge from what isn’t in the stories. Why are there no male characters, and what would one be like’? How can we tell what kind of bees these are? It’s all a bit silly, but it might get one or two heads off desks.