By Nick Schulte - September 15, 2015
I know it's been a long time coming, but the Final Four write-up never did get "published" (clicked the wrong button and subsequently became distracted), and the Final Two never got 'writ. This is in large part because the Red Mangrove vs. Periphyton quarterfinal matchup was happening at spatial and temporal scales that exceeded the time limitation of "March." But I also know so many of you have been waiting on tenterhooks for the past six months, so I'm happy to finally report the results of Marsh Madness.


It looks like after half a year, the mangroves have finally pushed the periphyton northwards and come out the victor. After that, things happened too quickly for any voting to take place. Here's what the Final Four looked like, representing each category:

The veritable Vertebrate is the Ibis (10).

The top Primary Producer is the Red Mangrove (2).

And representing the Invertebrates is the Alligator Flea (1).

While the Ibis brought with it all the momentum, it was facing a cat - the species responsible for, by some estimates, over 1.3 billion bird kills per year. So the Ibis really had no chance. Meanwhile, since the Red Mangrove destroyed the periphyton, the Alligator Flea found itself with less available habitat, and the Alligator Flea was exterminated with relative ease.

That made the Marsh Madness Championship the Feral Cat (Invasives, 16) vs. the Red Mangrove (Primary Producer, 2). I have to admit, there are more enticing matchups of species that might normally interact. Overall, though, the Feral Cat somehow came out on top, supported largely by a huge fanbase of seemingly unwarranted support. But the results of this completely unscientific and sarcastic championship were clear: saltwater intrusion seems to be helping out the Red Mangrove, and feral cats might just take over the world. 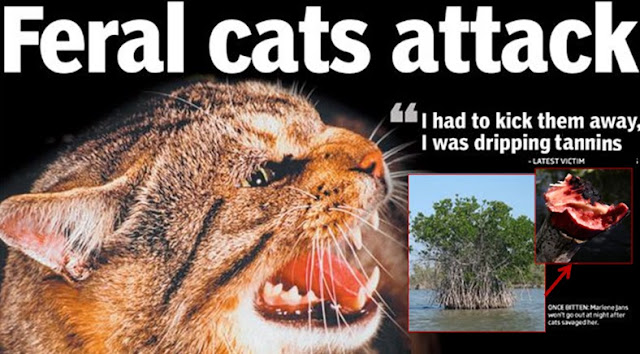 (*I know this is seems a hurriedly and disheartened conclusion to Marsh Madness, but thank you all for your participation and stay tuned for potential future, better organized tournaments!).