‘Who’ is it?
Tursiocola ziemanii is one of three new species described by FIU’s Dr. Thomas Frankovich and colleagues in a recent paper in Phytotaxa, a journal dedicated to the publication of discoveries on the taxonomy of plants, algae, mosses, lichens and fungi. The name was chosen to honor Dr. Joseph C. Zieman (1943–), in recognition of his generous support of diatom research in, and contributions to our understanding of, Florida Bay. 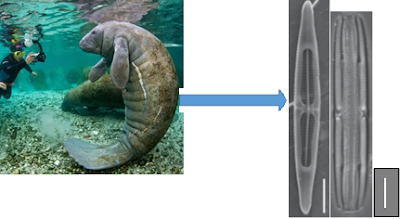 Where does it live?
This diatom lives in a somewhat strange place: on the skin of the West Indian manatee (Trichechus manatus), a familiar ‘face’ in Florida waters! And in very high numbers: in Frankovitch’s study, 90% of all diatoms on the manatee skin were of Tursiocola ziemanii. This diatom probably tolerates large changes in salinity as manatees are migratory mammals who move from freshwater to marine environments1. There are many other epizoic diatoms - that is to say they live on animals like whales, porpoises and even on other small plankton!

Why are we studying it?
There are between 20,000 to 2 million species (!) of diatoms on Earth with many new discoveries under way. About two years ago, Frankovich and colleagues took samples of dried skin from the belly area of a deceased adult female manatee and, after these were treated chemically at the Florida Bay Interagency Science Center (Key Largo), Tursiocola ziemanii, and her diatom ‘sisters’ T. varicopulifera and T. costata were ready to be brought to light under the microscope. Will they become famous as the ‘manatee diatoms’?

What can you do?
Diatoms can tell us so much about the historical and present conditions of many environments and allow us to predict how these will change. Their diversity and ability to disperse, live and reproduce in very different places and conditions is fascinating and important. That is why many researchers have been studying these microorganisms since the times of the father of evolutionary thought, Charles Darwin, who once even wondered: “were these created that they might be examined and admired under the high powers of the microscope?”. But algae such as diatoms also inspire artists who arrange them in truly amazing compositions, draw, paint and even build sculptures of them!

The least we can do is get interested and admire these ancient aquatic plants and ‘listen’ to what they tell us - via ecological research- about the environment, its natural cycles and the vast anthropogenic ongoing changes. After all, we would not breathe oxygen if it wasn’t for plants and algae!