‘Who’ is it?
The genus Gomphonema includes numerous species growing on mucilaginous stalks. These diatoms are asymmetrical biraphid, as the bottom part is usually longer and thinner than the top part and they have two raphes, narrow slits that allow them to move over surfaces. Yes, there are diatoms that perform photosynthesis, move and even eat organic matter! G. parvulum is on the lower end of the size spectrum for the genus (length from 15 to over 100 µm and width between 5 and 15 µm). 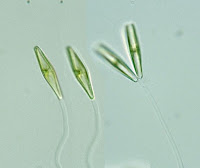 Where does it live?
In North America, species of Gomphonema can be found in many habitat types in lakes and streams with pH close to 7. Gomphonema parvulum is widespread and tends to live in freshwater with high nutrient concentrations. Therefore it has been widely used as an indicator of eutrophication, including in the Everglades where agricultural fertilization has historically increased phosphorus levels1 the reduction of which is part of the largest wetland restoration programme in the world. It has a cosmopolitan distribution, but different geographical regions have been shown to host different clades of G. parvulum from Mexico, the Faroe Islands, Germany and Korea: Gomphonema parvulum sensu strictu, G. saprophilum, G. lagenula, G. narodoense2. Increasing evidence is showing that this and other species of diatoms have evolved in relation to climate, geography and water quality so that truly cosmopolitan taxa may be less common than previously thought.

Why are we studying it?
In the Everglades, G. parvulum is a dominant taxa, particularly in freshwater marshes; FIU’s Franco Tobias, Evelyn Gaiser and collaborators analyzed samples from 237 sites to suggest revisions of its taxonomy and clarify confusion that often arises in such a complicated, and at times subjective, discipline. They identified 20 taxa of Gomphonema parvulum-like diatoms from the Everglades; so far no new species have been found. This might be due to the Everglades being a ‘teenager’ wetland (about 5,000 years old) and very calcareous so that only a subset of this genus preferring acidic pH are selected3. But we have a lot of data and samples that may tell us some new ecological ‘secrets’ about Everglades diatoms - so stay tuned with the Gaiser lab!

What can you do?
If you are a Floridian or a U.S.-American, get familiar with the diatoms of the Everglades, it is your wetland! If you are not from this part of the world and you ever come to Miami for its beaches, you must also go visit this fantastic ecosystem that is increasingly threatened by sea level rise. To convince yourself, please visit the Florida Coastal Everglades Long Term Ecological Research Network website and look up for wonderful pictures of our diatoms and the precious environments they live in, from the ‘sweet-water' marshes to the salty-water mangroves and more! 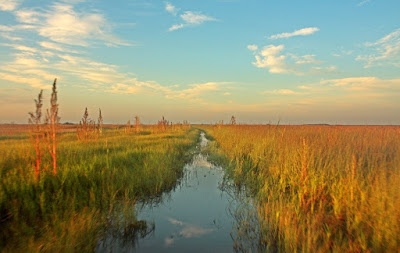 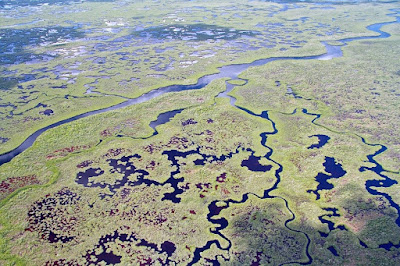 Tributary of the Shark River. Photo by Stephen Davis (26 June 2014)