‘Who’ is it and where does it live?
This centric diatom’s cells are drum-shaped, the valve diameter and the density of marginal striae are highly variable. Cyclotella meneghiniana is a rather cosmopolitan species; in tropical freshwaters, it is associated with various water depths and salinity1, and, in temperate regions, it is a typical planktonic taxon in the late summer-autumn2. In North America, this species can cope with a wide range of conditions, for example from freshwater to saline waters in the Great Plains lakes3. 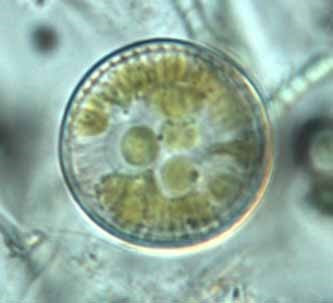 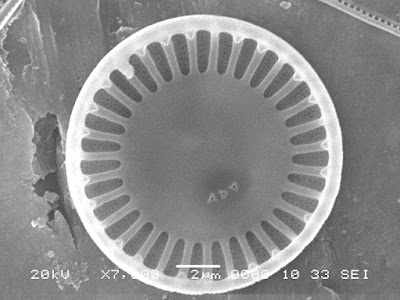 Why are we studying it?
Studying the distribution of this and other diatoms in thousands-of-years old sediment and ice cores, paleoecologists - nature’s ‘archaeologists’ - can infer past salinity, pollution, eutrophication and climatic changes4. Moreover, analyzing water, soil and vegetation samples, contemporary ecologists can identify the reasons behind recent natural and/or anthropogenic environmental changes. In the Everglades, diatoms have been used as indicators of water pollution and management; in Northeast Shark Slough, assemblages include this month’s ‘protagonist’ Cyclotella meneghiniana alongside the benthic species Brachysira neoexilis, Encyonema evergladianum, Mastogloia lacustris and Nitzschia palea var. debilis5. A total of 127 diatom species from North and South of the Tamiami Trail were observed in 40 samples in transitional areas; where phosphorus concentrations are higher, competition for this usually limiting nutrient is less intense and thus more species can survive and reproduce than just those tolerating its scarcity. 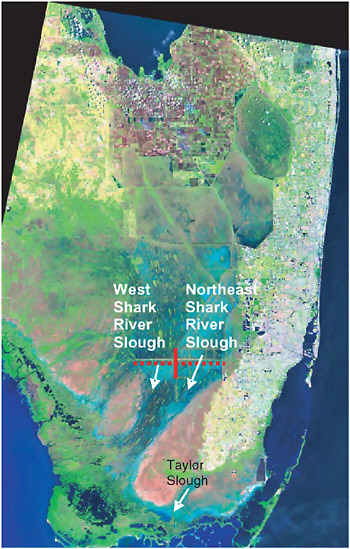 The Tamiami Trail (L29 road and canal) is an obstacle to the natural flow of water into the Everglades National Park that is critically important for algae and all wildlife. But water needs to flow better and faster also for the human population of South Florida and their reliable drinking water source, which is right under the Everglades! Installing water spreaders under the Trail can help restore the diffuse ‘sheet-flow’ and maintain at least portions of this wetland’s unique original landscape of sloughs, ridges and tree islands (plus alligator holes and so on…)6.

Diatom art
Human passion for nature drives scientists, artists and laypeople to investigate, but also depict and take photographs of, organisms such as birds and butterflies in the countryside or in forests, large mammals during safaris and so on. Some people ‘go deeper’ and transform the ‘invisible’ into artwork, very small overlooked life forms such as diatoms and other algae (like desmids), fungi and bacteria.

The ones below may look like some kind of flowers, but they are cells of our Cyclotella meneghiniana in a 12-color composition presented by my former colleague Gizem Berdici at the UCL “Research Images as Art” competition. 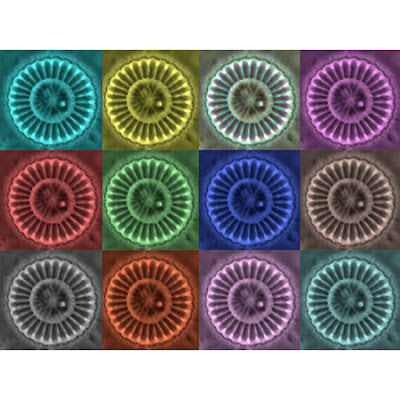 There is a lot to be learned about ecosystems and evolution by digging cores in lake or wetland sediments; finding, identifying and counting these minuscule algal remains enable scientists to know about their ecology, complexity, and artists to celebrate their importance and beauty. There is still time to visit the “In deep with diatoms” exhibitions at FIU BBC campus; if you are a student, why not take a break with friends and family to marvel at these beautiful artwork depicting these very real and astonishing organisms?! 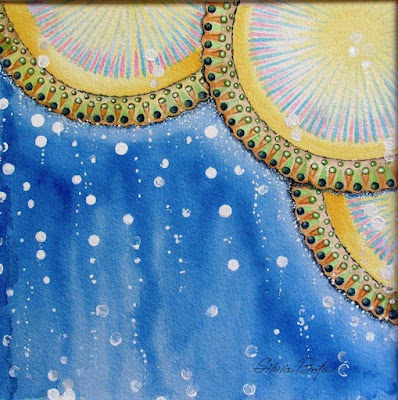 Sylvia Bota’s watercolor of cells of Cyclotella, part of the “In deep with diatoms” exhibition by Tropical Botanic Artists at Florida International University.