‘Who’ is it and where does it live?

This diatom is monoraphid, that is to say it has a raphe only on one valve, as shown in the figures. Monoraphid species are one of 9 major morphological types of diatoms - the other ones are: centric (like Cyclotella meneghiniana), araphid (e.g. Asterionella formosa, which forms star-shaped colonies!), eunotioid (e.g. the beautifully ornamented Eunotia diadema), symmetrical biraphid (e.g. the slender Navicula lanceolata), asymmetrical biraphid (e.g. Gomphonema parvulum), epithemioid (e.g. Rhopalodia gibba, which hosts nitrogen-fixing bacteria as symbionts), nitzschioid (e.g. the organic pollution-loving Nitzschia palea), and surirelloid (the big Surirella ovalis)1. Like in many other cases, the taxonomy is far from settled though; following recent research, numerous specimens usually named C. placentula should be more accurately named Cocconeis lineata and C. euglypta2. 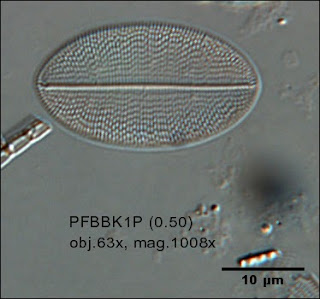 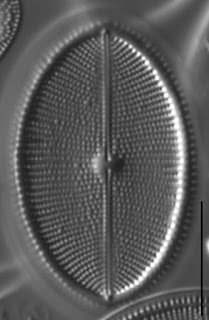 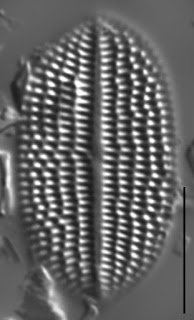 Like many other diatoms that are adapted to specific environmental conditions, Cocconeis placentula, is a freshwater epiphytic species that tolerates high salinity levels in the water. Why? A 2013 study on the Coroong wetlands (Australia) suggests that this diatom (and C. pinnata) is capable of regulating the size of its pore holes which control nutrient flows between the cells and the environment3. With higher concentrations of salt, this diatom basically spits out the ions in excess from aptly enlarged pores.

Why are we studying it?


Algae such as our diatoms of the month are extremely useful indicators or sentinels of the environmental changes occurring in freshwater ecosystems, including (as by now you know, if you read previous posts) the Florida Everglades. A recent study on sediment cores collected in this wetland’s marshes identified several species best adapted to shallow habitats with short hydroperiod (the number of days during which a site is flooded / wet), e.g. Nitzschia serpentiraphe, Achnanthidium minutissimum, and C. placentula, that were most abundant in shallow water / short hydroperiod habitats (<38 cm; <300 days), as opposed to deeper water / long hydroperiod habitats (>46 cm; >400 days), which were preferred by other taxa such as Eunotia flexuosa and Encyonema evergladianum4. So data on these microalgae, together with key hydrological and water quality information, can improve our understanding of the effects of water flow changes in the Everglades. The impacts of large-scale canalizations and water retention schemes - to respectively irrigate crops and protect cities from either floods or droughts – on the ecosystem – and that of restoration projects to enhance water flow to natural areas have been monitored for many years. Measuring and estimating past and present environmental conditions is crucial to provide South Florida water managers and state and federal agency policy makers with realistic scenarios of what the marshes and prairies will look like in the years to come, subject to different natural conditions and human choices. These models are then used by organizations such as the South Florida Water Management District, and the US Army Corps of Engineers, for example to increase the important flows of freshwater to Everglades National Park (“The largest subtropical wilderness in the United States”). 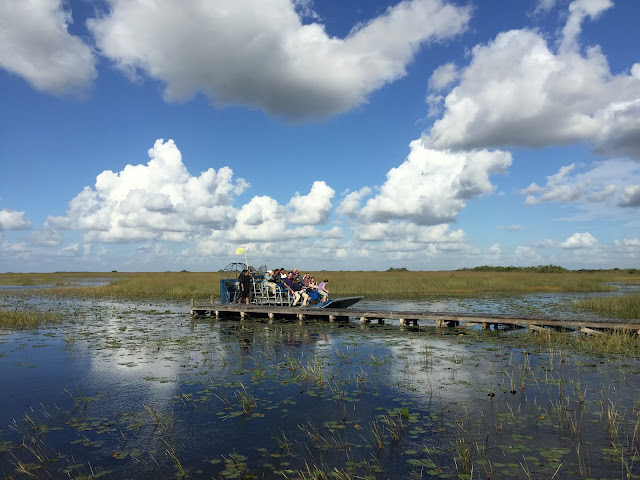 Faculty and staff members of FIU, South Florida Water Management District, and US Army Corps of Engineers near a large tree island during an official visit to Water Conservation Area 3A (November 2015).