This month’s diatom comes from quite far, some 5,000 miles or 8,100 km North-East of Florida: Northern Italy. Its name is Eunotia cisalpina (on this side of the Alps, the southern side), and it was described a few years ago1 by Marco Cantonati, the Science Museum of Trento’s (MUSE) Head Limnologist and Phycologist whom I am visiting this week. We are at the foot of the famous and wonderful Dolomites mountains, one of over 50 UNESCO World Heritage sites in Italy, comprising some of the highest limestone walls in the world. North-west from here, small mountain lakes, springs, and mire pools dot the landscape of the Adamello and Cevedale mountain ranges; their waters have lower mineral content than the calcareous Dolomites due to the prevalence of siliceous rocks, such as granites. These oligotrophic, acidic, low conductivity habitats are perfect for E. cisalpina (and for E. fallacoides and E. insubrica, other new taxa to science described in the same 2011 paper1). The authors of the discovery can now say that, some 10 years earlier, they had ‘confused’ Eunotia cisalpina with E. islandica1. This is common in taxonomy, as observing more specimens and features or using new methods, allows investigators to identify and thus name new taxa in a time consuming yet exciting scientific process. 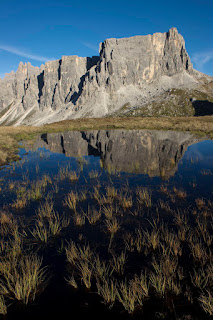 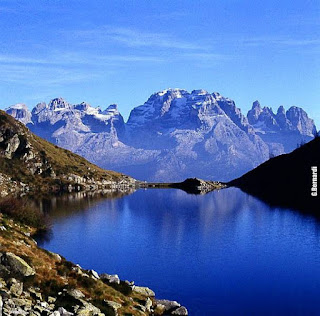 Left) Mountain lake in the Adamello, where rocks are mostly siliceous, and waters have very low alkalinity. This lake, as several others on the eastern slopes of the Presanella subgroup of the Adamello mountain range, beautifully faces the Brenta Mountain group (Western Dolomites); in this image, the contrast between different lithological substrata is shown, a characteristic of the Adamello-Brenta Nature Park. Right) further east, the Dolomites are made of dolomite (CaMg(CO3)2 or calcium magnesium carbonate) and extend over 1,000 km2 in the Lombardia, Veneto, Trentino Alto Adige, and Friuli Venezia-Giulia regions. Source: http://whc.unesco.org/.

Diatoms of the genus Eunotia are symmetrical to the transapical axis, but asymmetrical to the apical axis, and have a short raphe allowing them a limited movement (http://westerndiatoms.colorado.edu/). An estimated 600 Eunotia species exist globally, many of which are / can be used to monitor freshwater acidification caused by industrialization, due to their preference for low pH waters3. A number of diatoms living in these pristine mountain habitats are included in the Red List2, as these environments are sensitive to airborne acid deposition, and other pollution by metals. In particular Al, Ba, and Mn react with acid compounds, and seem to cause teratological mutations in diatom cells (congenital abnormalities)4, thus threatening important primary producers in remote lakes and wetlands. Another very interesting ecological characteristic of some Eunotia species is their apparent ability to resist desiccation by forming vegetative cells that survive heating1. This brings us back to the global warming challenge and its associated risks of more frequent and/or more intense droughts in a variety of freshwater ecosystems, from the 3,000 m alpine lakes in Europe to the Florida Everglades and other large wetlands in every continent. Diatoms and other algae, are indeed helping us to figure out how anthropogenic, including climatic changes, are profoundly modifying natural habitats. However, the scientific community needs much increased and sustained funding provision from public and private institutions to better and faster improve our ecological knowledge of such dangerous environmental changes. This is especially true for the detailed taxonomic and molecular work required to discover new species, know their biology and ecology, and use them as indicators of environmental conditions to advise decision makers on what to do, and not to do, to preserve and sustainably ‘manage’ ecosystems.