Many algae are able to form blooms, sometimes releasing dangerous toxins for aquatic organisms and people. Cyanobacteria are most infamous for producing blooms such as those ongoing in Florida's coastal waters, but other algae, including diatoms, can create such vast colonies too. The large (100,001-1,000,000 µm3) asymmetrical biraphid Didymosphenia geminata, or colloquially ‘didymo’ is one of them; it attaches to stones in rivers by stalks (made of mucopolysaccharides, long chains of sugar molecules) that can be 1 m long! Didymo is invasive in Argentina, Chile, and New Zealand, where this video was released in 2008 to inform the fishing community that they should clean and dry all their gear to avoid spreading this species to other water bodies. 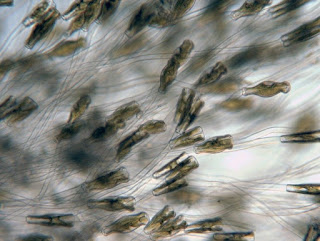 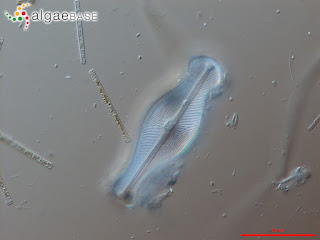 This diatom is also widely present in the United States, Europe, Russia and parts of Asia (Fig. 2), and it surprisingly occurs mostly in rivers and streams that are oligotrophic (with scarce nutrients) and unshaded, rather than eutrophic (with abundant nutrients), as is the case for many cyanobacteria blooms. Interestingly, stalks and thus colonies are larger with lower nutrients, as D. geminata cells compete for scarce phosphorus (P), an often limiting nutrient2; blooms are due to a phenomenon called oligotrophication, or nutrient depletion in turn linked to acid rain, nitrogen enrichment, snowmelt and growing season timing shifts, and lower P in the oceans due to reduced salmon populations3. High light levels are also required by this species to produce the stalks that comprise most of its blooms biomass.

The discovery that this diatom preferentially forms blooms with [P] < 1-2 µg/L (or ppb, parts per billion) stems from a sequence of experiments (see Fig. 3), and studies culminating in Bothwell and colleagues’ epiphany that blooms do not seem to persist despite, but because of, low P3. 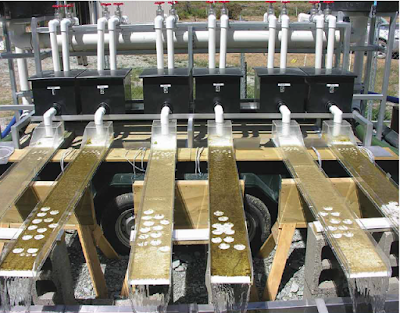 In the first place, the current spread of the “woolly-looking thick mats” of D. geminata started with fisher people accidentally transporting its cells on felt-soled waders, and fishing gear (Fig. 4)4. Thankfully, initiatives to stop the production of this type of boots are taking place, a simple and direct measure to avoid, or at least limit, the associated negative impacts on the quality of drinking and recreational waters in many rivers worldwide.