I would like to introduce you all to Medlinella amphoroidea, a new taxon that was observed on loggerhead sea turtles, as the November diatom-of-the month. But, before I get to discussing the morphology and ecology of this new genus and species, I will tell you all a personal story of serendipity and professional relationships. It was early 2013, and I had received an email from Dr. Brian Stacy, a marine veterinarian at the National Marine Fisheries Service, and a friend from when we worked together investigating parasites in marine gastropods. Brian told me that his wife, Dr. Nicole Stacy, also a marine veterinarian, was interested in identifying organisms that she suspected were diatoms that were on skin smear slides and contaminants in blood, urine and teat fluid samples from Florida sea turtles and manatees. 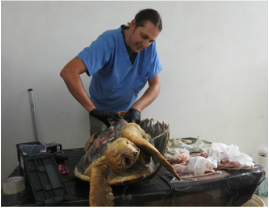 I subsequently found out that pathologists were frequently misidentifying diatoms and reporting them as “parasite eggs”! Obviously, it is important to distinguish likely benign diatoms from harmful parasites, and so I told Nicole that I would gladly examine photomicrographs of her samples and that it would be no problem to identify these suspected diatoms using descriptions of the local diatom flora. After all, the sea turtle and manatees probably picked up these diatoms from the surrounding environments, right? Wrong! Nicole had immediately sent me images of various samples collected from manatees and sea turtles. The samples were uncleaned and were stained with a dye to reveal cytological characteristics of interest to a pathologist. These are not the best samples for a diatomist to examine, so most diatoms could only be identified in the broadest of terms (e.g., radial centric, raphid pennate). I asked Nicole if she had material to clean, mount, and examine using standard diatom methodologies. She told me that she only receives prepared slides from the field. End of story? Not yet. About a week had passed when an Everglades Park Ranger knocked on my office door at our Florida Bay research station and asked if I could help him move a dead manatee that was reported in the bay. I suppose most people would say no to moving a dead smelly manatee, but for me this was a gift from the heavens. I finally got my hands on an adequate sample for my planned examinations, but I was in for a rapid deflation of my presumed diatom identification abilities, and for a big surprise. 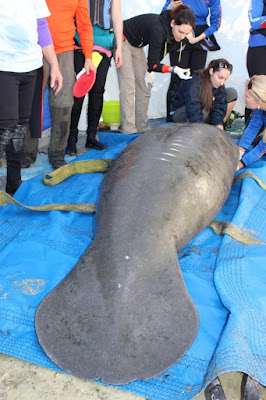 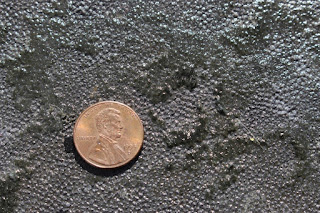 Fig. 2. A manatee captured for a health assessment (left) and a close –up of the manatee skin (right) with a film of epibionts, including diatoms (Photos by Tom Frankovich).

If you are a fellow diatomist in the blogosphere, you may agree with me that the most exciting part of our work is looking at a sample for the first time. Like a child waiting for Christmas morning, I anxiously awaited for the cleaning and rinsing of the new diatom sample to be complete. What I saw through the microscope was an assemblage unlike anything I had seen previously. First, instead of seeing a very diverse collection of tens of diatom taxa, I saw an assemblage comprised of very few taxa. 95% of the valves appeared to belong to 2 or 3 taxa. Second, I could not identify the dominant taxa, not even to a genus!  Even after scouring 58 reference books, and a file cabinet of reprints of benthic diatom taxonomy, I was still lost! Time to call for help. I emailed photomicrographs to Dr. Mike Sullivan, the former 20+ year editor of Diatom Research, and the person who first sparked my interest in diatoms. I told him of my challenges. He immediately replied back saying that he was not surprised that I was unable to identify the genus in those references. He indicated that the diatoms belonged to one of two genera – Tursiocola or Epiphalaina. These genera were exclusively epizoic, and up until 2012, were known only from the skin of whales and therefore, we were very unlikely to find these in benthic diatom literature.
The small number of species within these genera and the relatively recent descriptions with SEM images of these taxa made it relatively easy to compare our specimens against the described species and determine if they were new to science. Subsequent SEM analyses revealed that there were 3 new species of Tursiocola in our sample (check out last year’s blog on T. ziemanii). This discovery of a new diatom world on the skin of a dead manatee, and opportunistically working with marine veterinarians, have opened up a whole bunch of new opportunities and investigations and brings our blog conversation to the present diatom-of-the-month Medlinella amphoroidea. This diatom was described from sea turtles captured in Florida Bay. After seeing the new diatoms on the manatee, we wanted to know if the same or similar diatoms occurred on sea turtles as we suspected from some of Nicole’s cytologic specimens. We found a similar low diversity species assemblage with some of the same genera; the species composition was different, but we also described another new Tursiocola species (T. denysii) along with M. amphoroidea.
So here is the profile of Medlinella amphoroidea. This species is very abundant on the neck of loggerhead sea turtles, accounting for up to 50% of diatom valves observed in skin samples. It is a very small diatom, only 7-13 microns (µm) in length. Using light microscopy, its valves are likely to be misidentified as a Catenula or small Amphora species because of its shape and eccentric raphe-sternum, but careful focusing through valves with attached valvocopulae1 or through intact frustules will reveal septa2 present on the girdle bands, differentiating Medlinella from these other genera. M. amphoroidea is most similar to species in the epizoic genera Tripterion, Chelonicola, and Poulinea and other “marine gomphonemoid (Gomphonema-like) diatoms”. The amphoroid shape of the valves and the unique volate pore occlusions3 of the areolae distinguish Medlinella from these genera. The genus name honors Dr. Linda Medlin in recognition of her work describing marine gomphonemoid diatoms. 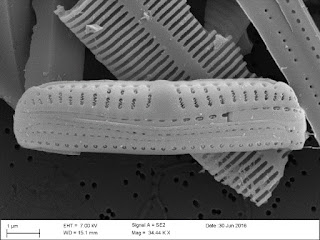 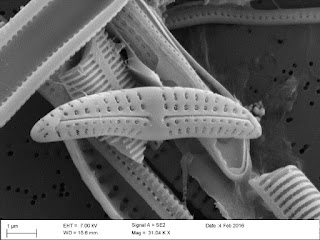 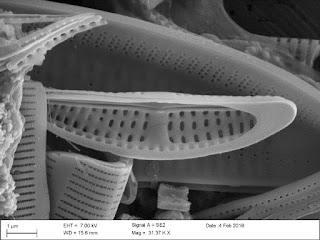 I hope my story will encourage some of you out there to share your passion for diatoms with other scientists and to pursue any opportunities that may present themselves. The seeds of future exciting discoveries start with a conversation. Thanks again Luca and readers, for our continuing conversations on the diatom-of-the-month blog.

* Research Faculty at the Southeast Environmental Research Center, Florida International University.
1. Valvocopulae: the first girdle bands that attach to the valve
2. Septa: inward projections of silica that partially separate areas within the cell.


3. Volate pore occlusions: flap-like outgrowths from the sides of the pores with narrow points of attachment and irregular branching, as opposed to cribrate or rotate occlusions.
Algae Diatoms Manatees Taxonomy Turtles