Diatom of the Month – May 2017: Navicula lanceolata

Navicula lanceolata (Agardh) Ehrenberg 1838 is a symmetrical biraphid diatom with lanceolate valve margins, broad in the central valve and slightly rostrate, rounded ends (Fig. 1, #1); the central area is an irregular oval (Fig. 1, #2), and striae are radiate, except at the ends where they become convergent (Fig. 1, #3). This species has two chloroplasts, one along each side of the girdle (Fig. 2) and is highly motile. 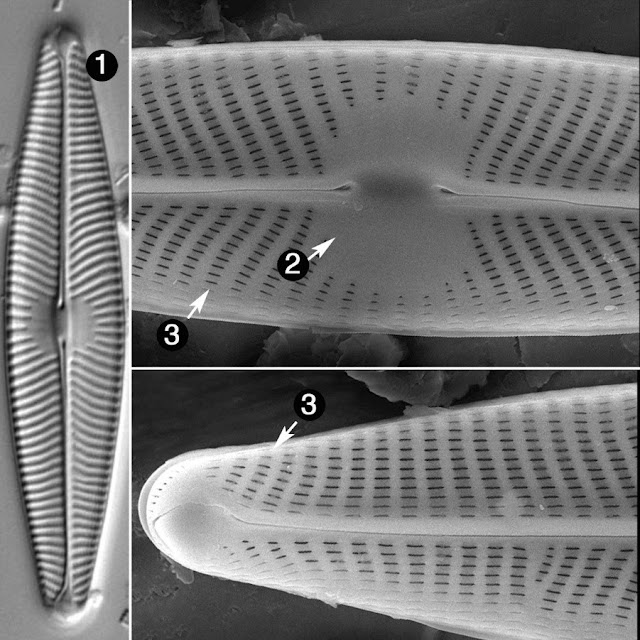 This is one of the most widely-distributed and frequently-encountered diatoms in both Europe and North America and is particularly abundant in winter and early spring; like a few other motile diatoms, it can form dark-brown patches on the top of biofilms (Fig. 3) visible to the naked eye. It can be abundant in streams and rivers that are relatively unpolluted, but it also thrives in water that is quite heavily enriched with both nutrients and organic pollution. N. lanceolata however is not found in very soft or acidic water and is much less common in lakes. 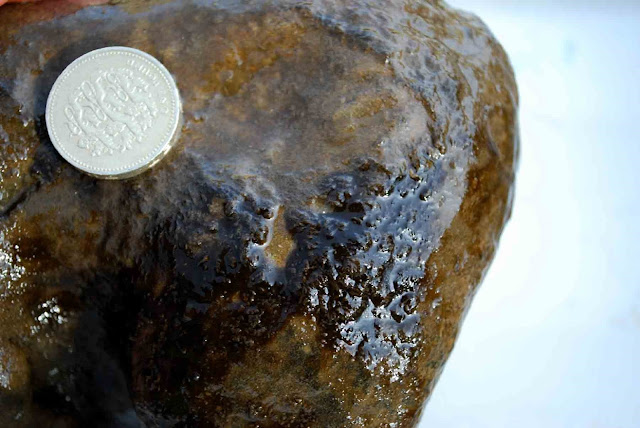 Fig. 3. Dark brown patches of Navicula lanceolata on the top surface of a cobble collected from Thropton Burn, Northumberland in early spring (with a pound coin to indicate scale).

Although this broad tolerance of environmental conditions is often interpreted as an indication that there may be genetic variation and, perhaps, cryptic or semi-cryptic species lurking within the traditional description, this does not seem to be the case for this species (M. Kelly, D. Mann, S. Sato, unpublished data, based on variation in the rbcL gene). That previous sentence should probably be re-cast as “a wide range of the chemical conditions that ecologists worry about” because Navicula lanceolata is almost certainly as choosy as any organism about the conditions where it thrives. It is just that the variables that we use to represent “pollution” do not feature strongly in the life choices of this particular species. It also confuses us by thriving at the time of year when many ecologists in the northern hemisphere are hunkered down in their laboratories and offices rather than out in the field. But anyone who is prepared to head out to a stream on a winter’s day when river levels are low and plunge their hand into the freezing water is likely to be surprised by the thickness of the biofilm relative to what we expect in the summer. If stones are fairly well embedded into the streambed, the algae that grow on their upper surface are not that vulnerable to being scoured off by high current velocities, as there is a “boundary layer” just above the stone where friction reduces the current velocity substantially. Also, at this time of year, invertebrate grazers are less active and so this is a period when algae which can cope with cool water thrive. 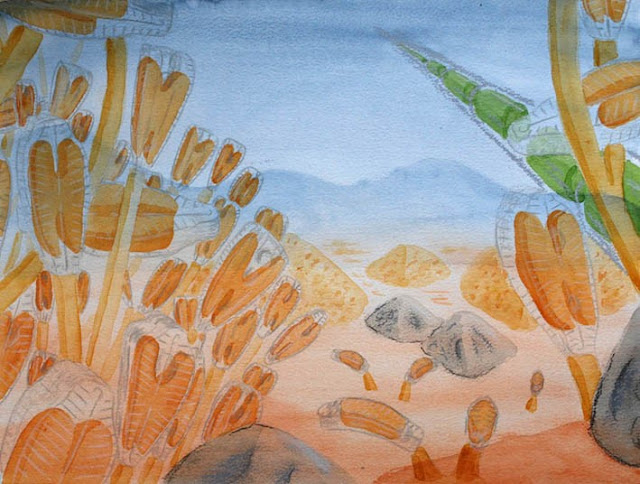 Fig. 4. The underwater landscape of the River Wear (Co. Durham, UK) in February, with individual motile cells of Navicula lanceolata moving through “bushes” of Gomphonema olivaceum. There are also some cells of Achnanthidium minutissimum in the foreground and a filament of Ulothrix zonata in the background. For more examples of illustrations such as this see www.martynkelly.co.uk.

Life in a thick biofilm, however, creates its own problems. For example, abundant algae, bacteria and particulate matter block out the little winter sunlight that filters through the water to the stream bed. Being a motile organism has clear advantages, allowing N. lanceolata to move through the biofilm to the surface layers where it can harvest this sunlight. This species is one of a small number of diatoms (Navicula bottnica, an estuarine diatom, is another) that seem to aggregate to form distinct dark brown patches on the top of submerged biofilms (see Fig. 3). If you scrape a small part of one of these patches from the rock and examine it under the microscope, you will see a near monoculture of one of these species.

That these dark brown patches of diatoms live on top of a submerged biofilm suggests that we should take account of the organization of organisms within a biofilm as well as simply listing all the species that we find. However, the standard means of sampling a stone are too coarse to preserve such subtleties. A biochemist is interested not just in what amino acids constitute a protein, but how these are organized, because it is this that determines their function. In the same way, the organisms that inhabit microscopic biofilms are not distributed randomly within those biofilms. Moving beyond making lists of species is, however, far from straightforward. Some such as Lothar Geitler have achieved this using cytological preparations of carefully-collected material (Mann, 2015). Others have used scanning electron microscopy to similar ends (Rimet et al., 2009). My approach has been to try to recreate the three-dimensional form of biofilms using paint and pencil (Kelly, 2012). Fig. 4 shows a reconstruction of the type of microhabitat where I find Navicula lanceolata in the rivers of northern England. The long stalks associated with Gomphonema olivaceum and ‘relatives’ creates a matrix within which motile Navicula and Nitzschia species can move in order to make the most of the resources that the habitat has to offer. As the months pass and the water warms, so invertebrates become more active and graze away the biofilm until, by May, it will consist mostly of Achnanthidium minutissimum and ‘relatives’ which form a microscopic “pasture” on which caddis and chironomid larvae graze.

Diatomists interpret ecology in terms of spatial distribution in relation to chemical variables. But Navicula lanceolata is a good example of a species whose distribution depends as much on physical and biological factors (e.g. cool conditions and a thick biofilm) as it does on water chemistry. There are, undoubtedly, many other diatoms in our rivers that have similarly rich stories to tell. Poring over the minutiae of diatom frustules has yielded much useful information over the years, but many of the secrets of this group of algae are lost as soon as we souse them in oxidizing agents. This species serves as a good reminder that studying diatoms in their live state often yields precious additional insights into their ecology.

Kelly, M.G. (2012).  The semiotics of slime: visual representation of phytobenthos as an aid to understanding ecological status. Freshwater Reviews 5: 105-119.