This guest post was written by Phil Matich, a graduate researcher in Dr. Mike Heithaus' lab at Florida International University. 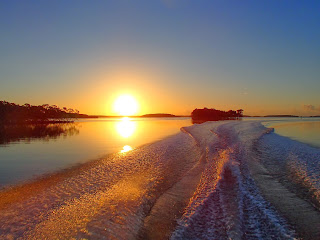 We just got back from an amazing trip in August!  As always, we left early in the morning and were fortunate enough to catch the tail end of the Perseid meteor shower as we drove to the boat ramp.  On our way to the field site we saw the sun rise over the water and the mangroves, and then got right to work catching sharks.  On the first live, we caught two sharks, 79 and 85 cm total length, and surgically implanted the smaller individual with an acoustic transmitter so that we could track its movements.  Surprisingly, the larger shark was an individual we had caught and tagged in July, and is one of the first sharks we’ve recaptured in the last three years! 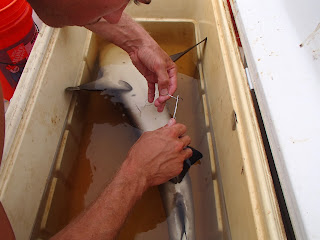 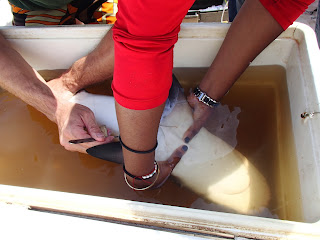 After only a month, the shark has grown 2 cm and gained 1 kg in body mass; the scar from the surgery has completely healed, and one of the sutures had already dissolved, and the other marks from tissue collections were healing (see the picture of the fin clip).  On the second set, we caught three more sharks (74, 81, and 104 cm TL), and acoustically tagged the 81 cm TL shark to track its movements.  After only a few hours on the water he had caught five sharks and deployed two transmitters!  On the third set we caught another shark (104 cm TL), and had a surprise on the line - a 2 meter alligator, which is the first gator we’ve caught after >3000 longline hooks deployed in the estuary.  It was pretty skinny and very docile, so it was probably sick and in poor condition and just looking for an easy meal.  We cut the line and the hook that was stuck in its mouth will rust out in the next month or so - I wasn’t going to reach my hand in to try and get it out.  Overall, it was an awesome day!  And, we got to hang out with a dolphin for a little while on the ride back.  I’m looking forward to more days like this in the future. 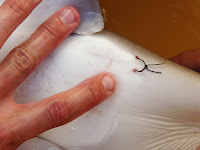 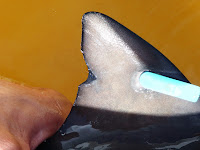 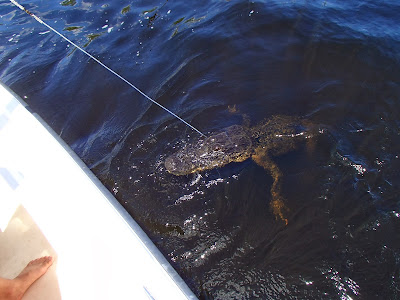