Why do we still know so little about common species?


This guest post was written by James Stroud, Ph. D. student in Dr. Ken Feeley's lab at Florida International University.  He is a regular blogger on the Feeley lab blog upwithclimate.

South Florida is a wild place for lizards. And at the moment, as the region’s most abundant native lizard, life sucks for the American green anole Anolis carolinensis.

In the recent past a wealth of invasions have occurred from exotic Caribbean Anolis leading to the establishment of up to 10 non-native species around the Miami area, annually creeping further outwards towards the Everglades. The effect of congenerics on American green anoles has been well studied; the presence of an ecologically similar competitor – such as the now widespread Cuban brown anole Anolis sagrei (Fig. 2) – has forced them higher up into the trees and off the ground.

However, the majority of these studies have been conducted in spatially explicit areas, that is to say on experimental islands. These have merits in themselves; it allows control of many assumptions which may skew your observations. For example, in continuous space one may expect species A to simply move away from species B if spatially out-competed, however islands offer the advantage of forced interactions meaning resource partitioning and habitat shifts may be more easily observed. 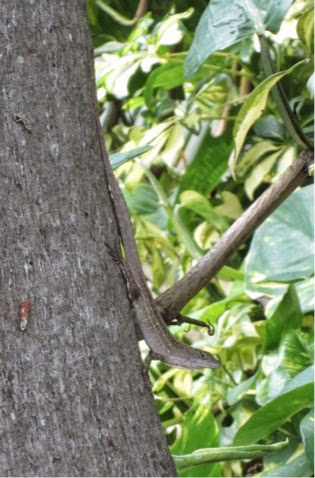 Isolated from all other Anolis since the pre-Pleistocene, the American green anole has had it pretty easy so far. They range from the southernmost tip of the USA, Key West, north to Tennessee, and west to mid-Texas (Fig 1). However the rapid range expansion of introduced species, pioneered by the previously mentioned Cuban brown anole, has caused the anecdotal decline of green anoles in the urban and suburban areas in south Florida. Whether this population decline is true, or a shift to arboreality has affected detection rates is unclear. What is clear is that the invasion by the exotic Anolis do not seem to be limited by habitat factors – yet.

Deep in the sawgrass plains of the Everglades the green anole still persists, for the time being at least, in allopatry. It’s ecology there is almost a complete mystery. Despite extensive research on the ecosystem, we know next to nothing about this species’ ecology here. Throughout the rest of its range a wealth of literature exists, however for populations in the Everglades we are still unclear on fundamental aspects of their ecology; habitat choice, diet, reproductive biology, sleeping sites or daily/seasonal activity patterns – all axes along which competitors may cause disruption.

And this is something that always puzzles me in ecological research – often we try to run before we can walk. Natural history is the basis of much of ecology, however in the present world of big science and meta-everything, this can often get overlooked.

The potential ecological impacts of exotic anoles on the native green anole in the Everglades are unknown, and as it stands any hypothesis would be theoretical at best. However as scientists, we must remember that some of the greatest theories have arisen from natural observations. Where would evolution be without Darwin’s twitching?

Not only does the invasion expansion of Caribbean anoles present a native species conservation issue, but the potential for a large increase in terrestrial insectivores seems a topic of interest that should merit some thought for a wide range of ecologists. The Cuban brown anole is already present at every car park along the Everglades road to Flamingo, likely transported unwittingly via humans. How long we have before they begin to disperse may just be a question of time.

I encourage all of us that have the privilege to spend time outdoors in south Florida to collect as many field notes and natural history data as possible. In this world of change, the global scale effects of climatic events and warming remain unresolved, much like the more regionalised effects of human management. The importance of these data are clear, but often overlooked; they describe reality. So I return to my original question – with such a rich history of research in the Everglades why do we still know so little about the regions most charismatic lizard?
Anolis Ecology Everglades Green Anole Guests Habitat Shifts Invasion Range

Ever wonder what an alligator's breath smells like? One of the perks of my research is I get to hang out within sneezing distance of the amazing reptiles and I can tell you from first hand experience that their breath smells like death. Two of the major questions I try to answer with my research is what do alligators eat in the coastal Everglades and where do they eat it? To get at these questions, I use two different techniques: stomach contents analysis (SCA) and stable isotope analysis (SIA).
Read more

Polar bear! In the EVERGLADES?!?! So how many of you know the poem "Algy"? " Algy met a bear. The bear met Algy. The bear was bulgy. The bulge was Algy ."
Read more

The end of low-mosquito camping season is nigh, and that's got me thinking about campfires and - a natural progression - campfire songs . And what better songs to sing in the Everglades than songs about the Everglades? In this series of posts I'll introduce you to some of my favorites, starting with: "Everglades" by The Kingston Trio:
Read more