Carbon dynamics from reconstructed (LILA) tree islands in the Everglades 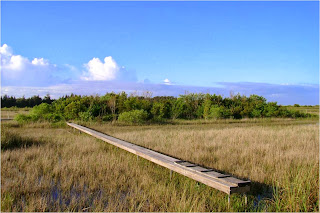 A few weeks ago, I attended the American Society of Agronomy, Crop Science Society of America, and Soil Science Society of America Annual Meetings in Tampa, FL. What a huge conference! My colleagues and I presented our most recent data on tree island Carbon (C) dynamics. Tree islands are one of the most prominent landscape features of the Everglades system.
Despite their importance, hydrologic modifications to the system have greatly altered the number, size, and distribution of tree islands in the Everglades. The original peat-accreting system stored large quantities of soil C and was a sink for atmospheric CO2. Hydrologic manipulation and wide-spread drainage have caused the oxidation, subsidence, and loss of large quantities of soil C. An important aspect of the Everglades ecosystem restoration is an attempt to reestablish a more natural hydrology. Increased freshwater flows through the Greater Everglades Ecosystem (GEE) are expected as a result of projects planned to enhance water delivery. However, the degree to which changes in water delivery will affect the tree islands is uncertain.Our work provides a before-intervention study conducted in the Loxahatchee Impoundment Landscape Assessment (LILA) facility (Boynton Beach, Florida). LILA is a research platform that supports the LTER project by defining hydrologic regimes that contribute to the preservation of existing tree island and potential mechanisms for tree island restoration/creation. LILA consists of four macrocosms, that mimic Everglades ridge, slough and tree island landscape structure. LILA exemplifies the tree islands found in the GEE and across the FCE-LTER landscape by having two types of constructed tree islands; those
where peat soils were sculpted to create topographic high, or where limestone cores were established and then covered to the same final elevations as the peat islands. These two core types are meant to represent tree islands from the northern and southern Everglades, respectively. 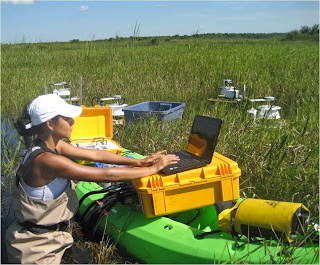 The objective of our work is to study vegetation and water flow interactions and how they influence C dynamics of Everglades tree islands. We developed an empirically-based model for tree island soil based on production and decomposition of organic matter as influenced by water depth fluctuations. Soil respiration (CO2 efflux), litter (organic matter) production, soil accretion (C sequestration) and soil elevation change measurements were balanced in two types of LILA tree islands (peat or limestone cores) at different water depth (high and low elevation). The higher elevations (drier) of the tree islands generally had higher biomass, litter production, and soil accretion. Peat core islands favor a more productive tree island plant community, but peat islands tend to subside more rapidly than limestone islands. In the peat islands and at higher elevations, trees were maximally productive. The centers of the tree islands seem to be losing elevation despite the fact that soil is being accreted at the greatest rate in these locations. There are several possible reasons for the loss in elevation, including root decomposition, sediment compaction since tree island creation, and groundwater withdrawal. Higher rates of CO2 efflux (i.e., soil respiration) occurred in the head of the tree islands at high elevation, coinciding with higher litter production and biomass. To date, our work has shown that production and soil accretion in relatively young (~6 years old) LILA tree islands do not build topography at a rate to compete with settling/subsidence. 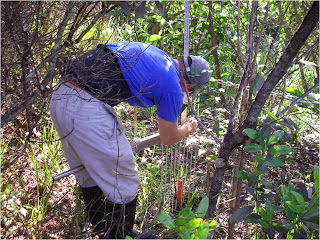 Overall, there was an effect of both water depth and island core type on C inputs/outputs. Carbon balance estimates to date have been made on young LILA tree islands at preliminary stages of formation. These mechanisms (e.g., litterfall leading to soil accretion) are developing and it is expected that further development will change estimates of C dynamics. Our research helped to balance present-day C inputs/outputs in the altered Everglades ecosystem. Understanding how Everglades tree islands soil respiration responds to water depth fluctuations coupled with organic matter production and soil accretion can be used by managers to slow or reverse tree island loss. Carbon cycling has always been and continues to be a primary research goal in the FCE-LTER Program.
The meeting was an excellent opportunity to discuss experiences with other scientists with similar interests and to get constructive feedback from experts in the field. I thank the FCE LTER for partially funding my trip through the 2013 LTER Student Travel Award for post docs and technicians. It gave me the opportunity to present our work and also meeting not only established members of the scientific community, but experts from the industry and consulting sectors.